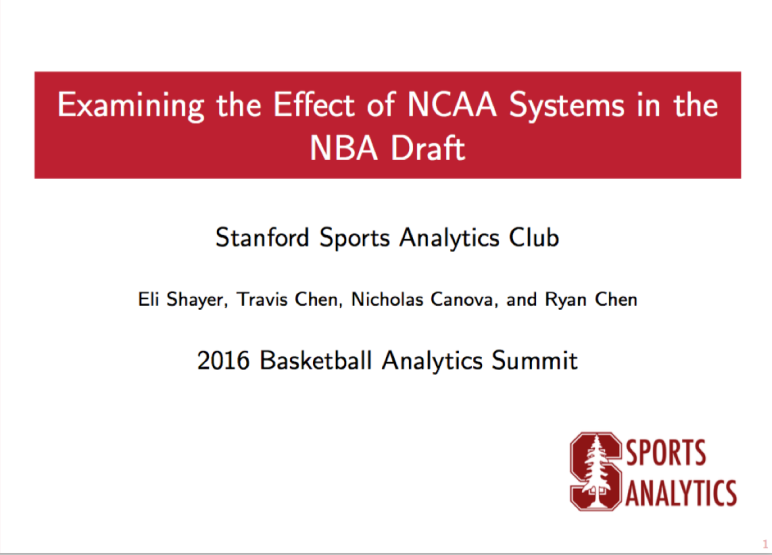 In April 2016, the University of North Carolina hosted its annual Sports Analytics Summit, featuring a series of excellent guest speakers, from Dean Oliver to Ken Pomeroy, as well as a case competition that challenged teams to analyze the effects of NCAA basketball systems on generating star NBA players. More specifically, the case challenged participants to answer the question “Are there certain types of systems (offensive and/or defensive) that work to best identify future NBA superstars?” Our team of four entered the competition, focusing on the impact of offensive systems specifically, and we present here our core analyses answering the question and thoughts throughout the process.

Given the open-endedness of the challenge, we asked ourselves several initial questions including (1) what constitutes an NBA superstar and bust player, (2) how could we categorize NCAA basketball teams into different systems, and (3) what analyses / metrics could we look at that may indicate an NCAA player is more likely to become an NBA superstar or bust than is already expected for that player. We will address the majority of our work in detail over 3 short posts, highlighting some of the key assumptions in this first post. Looking at each of these 3 questions in detail should give a fairly thorough review of our overall analysis.

First, what constitutes an NBA superstar? We considered several metrics for classifying superstars, including a player’s number of all-star appearances, his box score stats both for impressiveness and consistency, performance in the NBA playoffs, etc., however we ultimately selected a player’s total win shares (WS) over the first 4 years of his career as the sole metric to classify a star player, which brings up a key factor of our analysis. Since an underlying focus of the analysis is helping teams identify NBA superstars (the case competition was hosted and judged by the Charlotte Hornets), we looked only at player performance over the first 4 years of their career after being drafted, which is the time period during which they are contractually tied to a team before reaching free agency. Mentions of total WS throughout the post should be read as a player’s total WS over his first 4 years after being drafted. Since a player’s likelihood of becoming a superstar is of course closely tied to his first 4 years of performance, we did not see this focus as limiting. As for the cutoff, we selected 20 WS over a player’s first 4 years. WS assesses a player’s overall NBA value in terms of the share of their teams’ wins each player is accountable for, and serves well in determining superstar players. 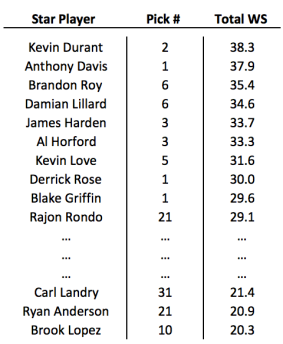 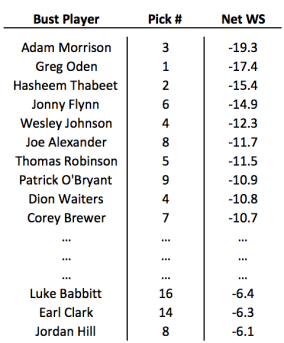 Second, what constitutes an NBA bust? We considered this question more challenging to quantify than the question on superstars, believing we could not look at WS alone on an absolute basis. Think about it this way – is a 60th overall pick with 0 WS a greater or lesser bust than a 1st overall pick with 5 WS? (5 WS over 4 years is very low for a top 10 pick – Greg Oden, highly considered one of the NBA’s premier bust players, even had 6.8 WS, whereas a star player such as Kevin Durant had 38.3 over this period). As expected, we consider that 1st overall pick to be the bigger bust than the 60th pick, due to the higher expectations put on top draft picks. More specifically, we considered any player drafted in the top 20 overall, with fewer than 8 total WS, whose WS were more than 6 fewer than what would have been expected given their draft position as a bust player. Both cutoffs for NBA superstar and bust seem arbitrary, but were selected them such that 5% – 10% of all players drafted were classified as stars and busts, respectively. The tables above highlight several of the star and bust players taken in the drafts between 2006 – 2012, and the players included in each table seems reasonable and passes a reasonableness test. Since this analysis requires 4 years of NBA WS data, we did not look at players drafted more recently than 2012, and lacked certain data earlier than 2006.

The last item we’d like to highlight in this post is clarifying what is meant by “WS were more than 6 fewer than what would have been expected given their draft position”. We will refer to total WS in excess of expected WS as net WS, and it is calculated based on the difference between actual WS and the expected number of WS given a player’s draft position. The graph below shows historically the average number of win shares in a player’s first 4 seasons at each draft position, with a line of best fit. We can use the graph’s line of best fit to estimate how many WS we expect a player to have then, given their draft position. For a player to over-perform their draft position, he would need to earn more WS than what the best fit line estimates. Going back to our earlier example, 1st overall pick Greg Oden would be expected to earn (-5.789 * ln(1) + 24.2) = 24.2 WS win shares, however only earned 6.8 WS, for a net WS of -17.4 As for Kevin Durant, his actual WS of 38.3 vs. expected WS given draft position of 20.2 resulted in a net WS of 18.1. 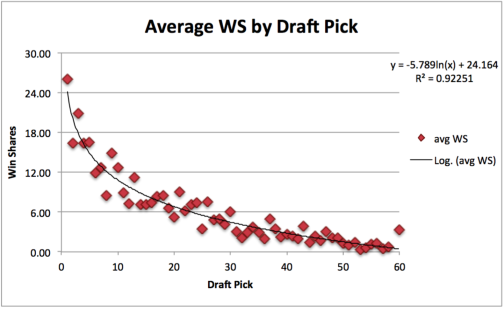 With this basic foundation laid down, in the next post we will begin to look at our main clustering analysis of NCAA systems based on play-types, and extend this clustering analysis to the college systems of those players we’ve classified as stars and busts using the criterion above.